Leading Transport and Logistics Company raises over £4000 for local charity 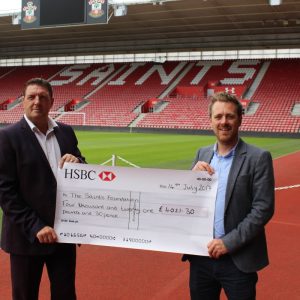 Members of staff from one of the leading transport and logistic companies, Meachers Global Logistics, have taken part in a number of events to help raise a fantastic £4021.30 in three months for local charity Saints Foundation.

Four members of staff from across the business took part in the annual Saints Big Bike Challenge, in association with the Foundation, which saw them cycle 180 miles from Stoke City FC all the way down to Southampton FC just in time to watch Saints play Stoke in the last game of the season.

“This was a massive challenge over two days, but we all managed to complete the 180 miles. There were some really tough moments but they were all forgotten when we got to enjoy a lap of honor at half-time.” Comments Joss Donnelly, Data Input Team Supervisor at Meachers.

Hannah Powell, Marketing Manager at Meachers put herself forward to run the ABP 10k. “I used to run almost daily before I had my son, so I thought what better way to get back into running again than to challenge myself with the famous 10k and to complete it for a fantastic local charity which is committed to inspiring and delivering positive change to young people and vulnerable adults across the South Coast.”

Gary Whittle, Commercial Director for Meachers said: “It was a great evening not only to raise a fantastic amount of money for Saints Foundation but also for six local organisations to get together and find out more about each other. The raffle and auction helped to raise an incredible amount of money and the winners, Paris Smith, were presented with the first glass trophy. The team coming last, Saints Foundation, were also presented in true style with the Wooden Spoon.”

Gary went on to say: “It is great to see not only the staff here at Meachers really taking pride in raising money for a local charity, but also other companies to join together for an evening of laughter, fun and some friendly competitiveness.”

“We are over the moon that Meachers has been able to raise over £4000 in less than three month for us” said Sam Fulling, Saints Foundation Manager at Saints Foundation. “The funds will make a massive impact to the people using our services and I just want to personally thank everyone who took part in the three events.”  Saints Foundation is an independent charity aligned with Southampton Football Club. They aim to fulfill potential and changes lives of young people and vulnerable adults across Southampton and surrounding areas.