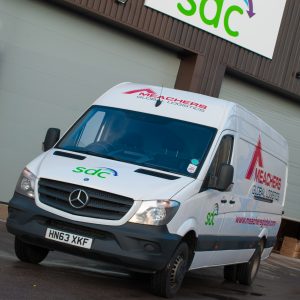 St Mary’s Hospital, part of the Isle of Wight’s NHS Trust is set to take advantage of the regions Sustainable Distribution Centre (SDC), which provides innovative storage and last mile delivery solutions. The newly signed agreement is expected to be the forerunner to a larger contract, which could see NHS hospitals in both Southampton and Portsmouth take part in the scheme.

The SDC concept involves receipting, storing or grouping goods with other loads destined for the same location, then delivering consignments together to reduce the number of delivery vehicles travelling into those areas. This type of service is particularly suited to the NHS, which has a requirement for low volume frequent delivery for consumable items that range from medical supplies through to life saving drugs and medicine.

Southampton City Council appointed Meachers to run the SDC after securing funding through the Government’s Local Sustainable Transport Fund.  The SDC operates from a 20,000 square foot site based on the Nursling Industrial Estate in Southampton. Isle of Wight Logistics provider Steve Porter Transport, a strategic partner of Meachers will ship the goods to the island and make the last mile deliveries.

The SDC has been operating in Southampton and the surrounding areas since 2014.

Meachers is midway through a 4-year contract with the City Council, which has seen it consolidate 300 pallets of items that were stored in 5 separate units across the city into one central location.

By using the SDC the council is expected to make financial savings in excess of £40,000 over the life of the contract by reducing fixed overhead costs and improving storage and retrieval procedures by using new bar coding technology.

Commenting on the project, Gary Whittle, Commercial Director of Meachers Global Logistics said: “The SDC has really started to gather momentum and we are delighted that the public sector recognises the benefits of smarter and sustainable logistics. The Isle of Wight project will ultimately reduce costs and increase efficiency for the Hospital and these benefits in turn can be mirrored in Southampton and Portsmouth.

“We are examining a number of groundbreaking strategies for the Isle of Wight and these include the use of electric vehicles. We believe that such an initiative would be the first of its kind for the region and if successful could prove to be a model for future projects.

“Pollution and congestion continue to be an issue for city and town centres. The SDC model helps to reduce carbon dioxide levels, particulates and nitrogen oxide emissions by reducing the number of delivery vehicles travelling to the same location. We firmly believe that the SDC will not only bring significant savings for St. Mary’s Hospital, but also wider environmental benefits for the Isle of Wight and Hampshire region.”

Meachers Global Logistics is one of the UK’s leading independent providers of logistics services. For over 50 years, the company has built an enviable reputation by providing customers with complete solutions to their Freight Forwarding, Supply Chain Management, Warehousing, Distribution, Logistics and Contract Management, Training and Advisory requirements.